Greenville is home to an evolving and dynamic public art program.  Funded largely through private donations through Hunt County Public Art, we invite you to explore our collection of murals, inter-active art, and sculpture.  Most of the art can be found along Lee Street and Washington Street. 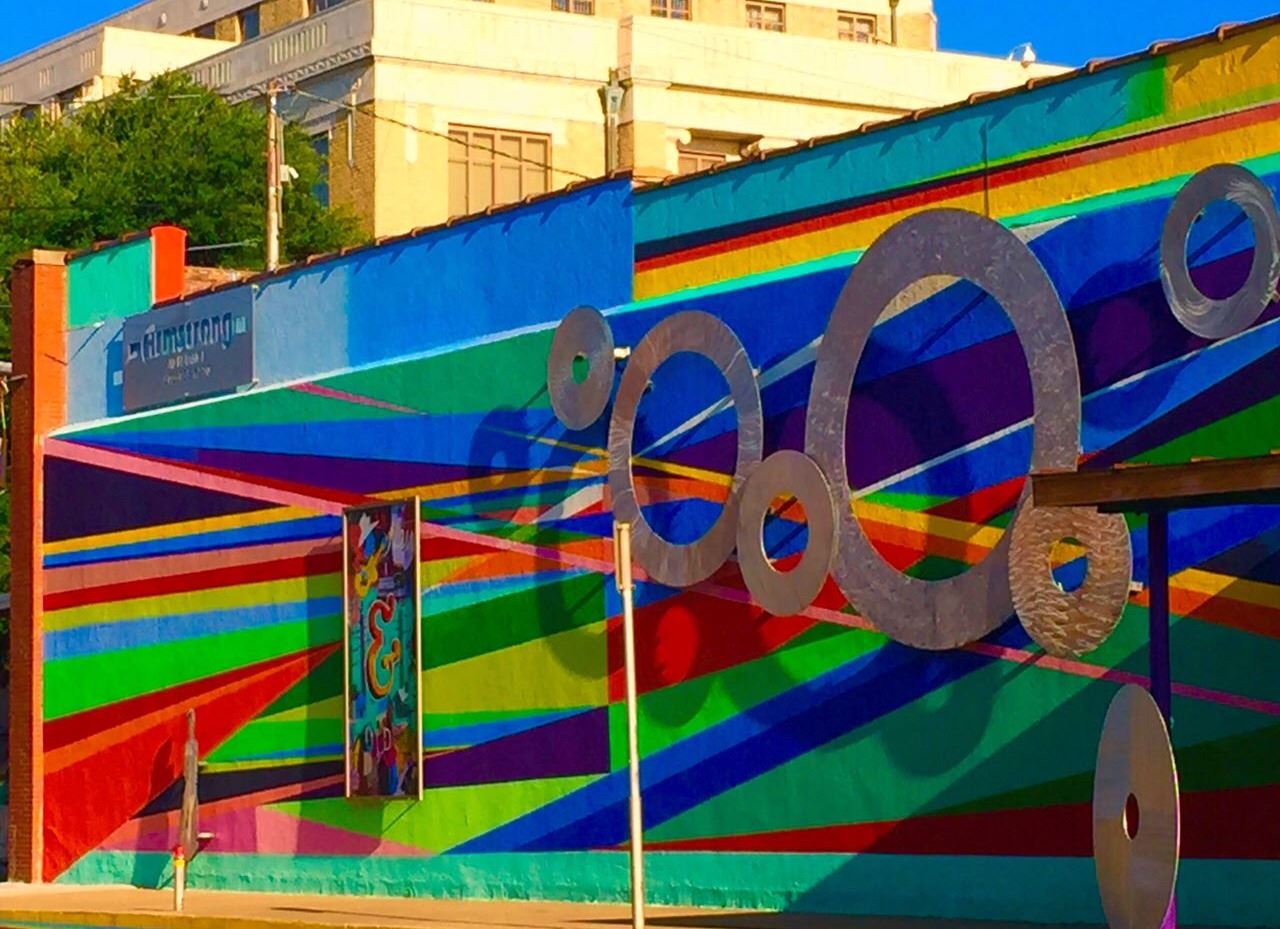 Spectrum by Cathy Smithey, can be found along the Washington Street side of Armstrong Appliances (Corner of Johnson and Washington).  Featuring bold bright colors, this is not just a mural, but a fully fleshed-out idea that has been thoughtfully and boldly designed to include a painted background, directional signage, a life-size sculpture of a famous citizen, a four-by-eight-foot framed section for changeable art, a metal sculpture attached to the wall and backlit at night, and a three-dimensional sculpture that sits on the edge of the sidewalk.

DID YOU KNOW - Many of the world’s most famous high-kicking dance lines — from the Rockettes in New York City to the Kilgore College Rangerettes to the Dallas Cowboys Cheerleaders — have been influenced by the pioneering work done here in Greenville. Featured on Spectrum is Gussie Nell Davis, who popularized the high-kicking dance style and unique uniforms for the Greenville High School Flaming Flashes before spreading her influence to Kilgore and around the world. 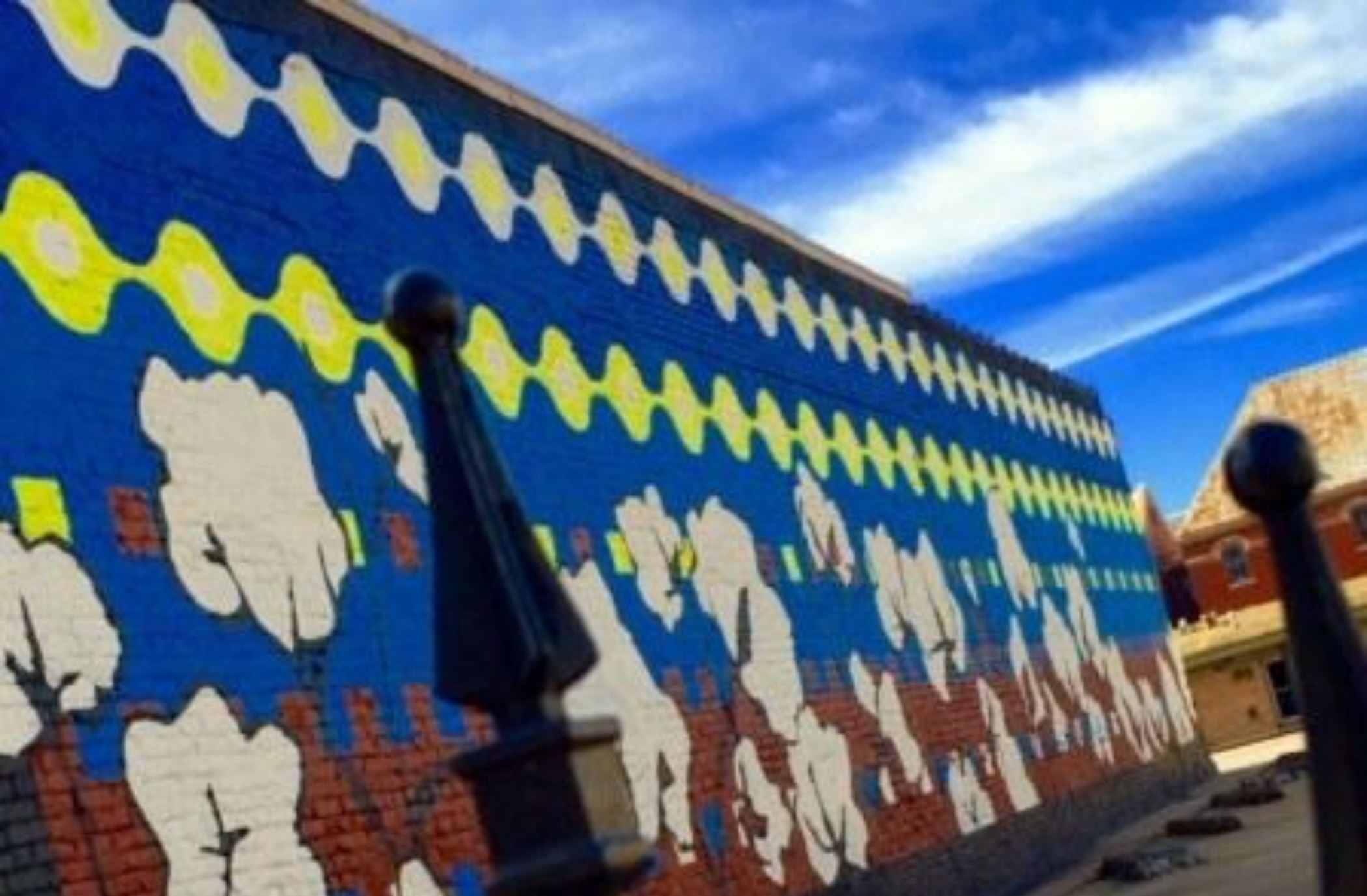 High Cotton by Pamela Edwards can be found along the Washington Street side of the Scott Ray and Sullivan Law Office at 2806 Stonewall.  This hard-edge abstraction celebrates the rich geologic history of Greenville, Texas. At top, wavy bands of blue indicate the many millions of years this area was underwater. White and bright yellow-green hues respectively represent salt and sulfur deposits that are abundant in local soil. Below, a multicolor rectilinear motif pays homage to Native inhabitants who cultivated the land. And the color transition from vibrant blue to deep red-brown symbolizes water seeping into enriched earth. In contrast to the colorful geometric layers above, colorless cotton whimsically emerges from blackland soil. It is cotton for which the city of Greenville became internationally known.

This mural was commissioned by Hunt County Public Art, part of Keep Greenville Beautiful. It was funded by Hearts for the Arts, and endorsed by Daniel W. Ray, Esquire. Artist Pamela Edwards was assisted by one student apprentice and local volunteers. 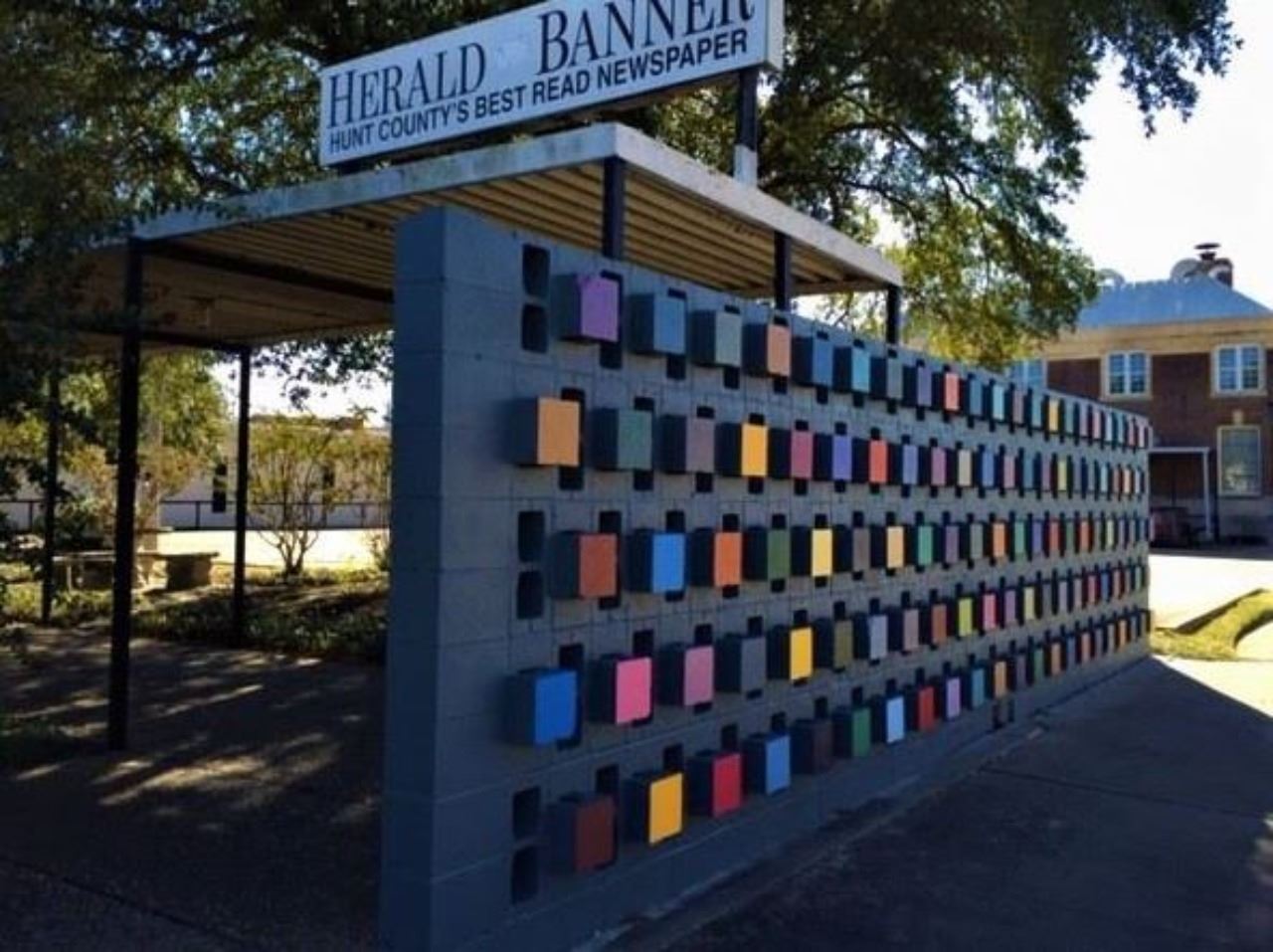 Find Your Match by Bob Bird, is located along King Street (just North of Lee Street) in front of The Greenville Herald Banner offices.  Many of Bob's works use a "grid painting" style which this installation plays off of.  This artwork uses a careful selection of colors that lets viewers play a matching game. Each individually mixed color has been applied to only two squares, allowing participants to try to find the matching pairs when you view it.

DID YOU KNOW - There are 109 blocks in this piece and Bob estimates that you should be able to find all of the matches in 15 - 20 minutes. 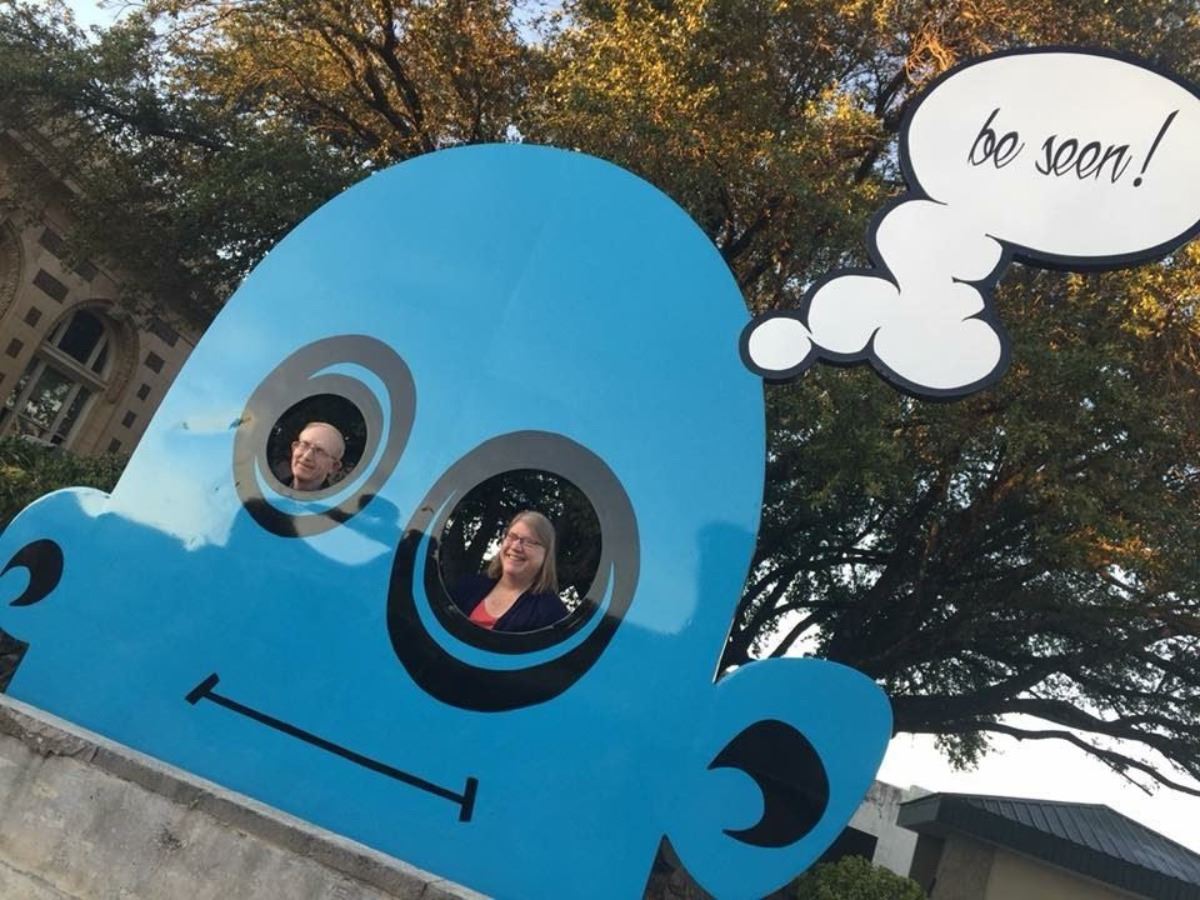 Be Seen by Brian Weaver, is located at 2900 Lee Street, just around the corner from Find Your Match.  This attention-getting sculpture is designed to let people photograph themselves within the fun artwork, using a double-sided design.  Standing about 12 feet tall, Be Seen is meant to reflect the blank expression of humanity.  By placing yourself into the sculpture, you too are experiencing what it's like to really put yourself out there.  The enormous size of the character trying to peek over this tiny wall ads to the whimsy of the piece.  This is a great photo op, so be sure to have your camera ready and "Be Seen" in Downtown Greenville! 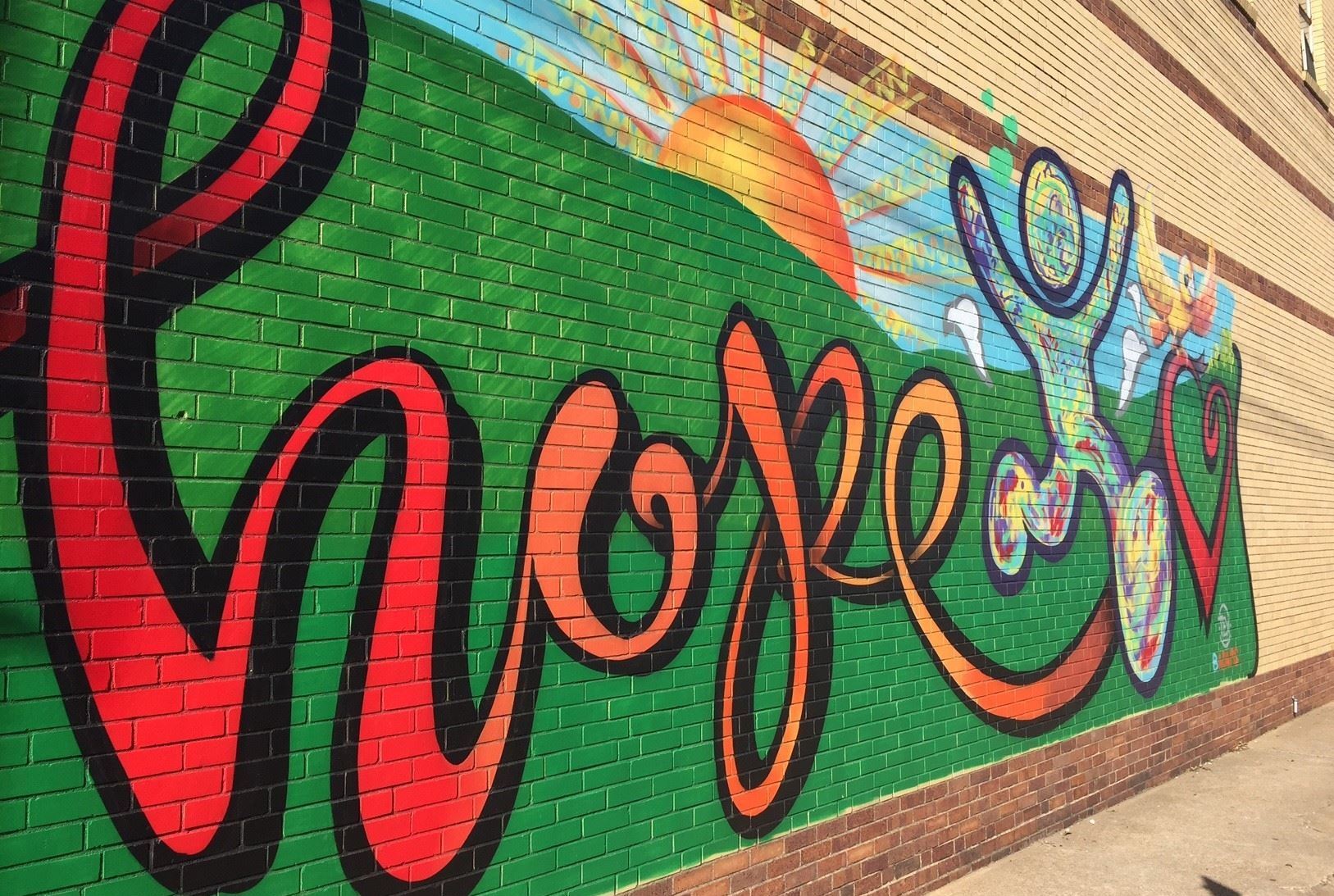 Hope by Brandon Adams and Tex Moton is located on the Stonewall Street side of the Hunt County Children's Advocacy Center at 2604 Lee Street.  This very colorful and playful mural offers a key message to children and families entering the Hunt County Children's Advocacy Center, a facility that helps children of abuse or children who may have witnessed a crime.

DID YOU KNOW - This mural is brushless, as it was created entirely by spray paint!  The artists used the Montana brand of spray paint (widely used by art professionals).  Each can's tips are adjustable , allowing for a surprising degree of precision.  About 100 cans of spray paint were used to create Hope.  The design was done on a computer and the artists only had color printouts on 8 1/2 by 11 pieces of paper.  Other than that, the mural was done entirely freehand, with no chalk outlines or projections on the walls.  Surprisingly, the entire 15 X 40 foot piece was completed in just 9 hours!

A Legacy of Performance by former Greenville resident Pat Rawlings is a larger-than-life, assembled mural that reflects the great performances from the Greenville Municipal Auditorium (GMA) which is located directly across Washington Street. Performances alluded to include: Elvis Presley, Roy Orbison, The Dallas Symphony, The Kenneth Threadgill Concert Series, various classical, contemporary and country artists as well as numerous plays, musicals and dance performances. The traditional, brick-veneer wall is an historical witness which has greeted attendees as they exited all of these performances. The unassuming facade is now finally able to respond with energetic imagery that captures the spirit of the GMA.

The mural design was originally created on a computer using a combination of digitally painted and photographic elements. These elements were then outlined by hand with cutting vectors alowing them to be cut out on a CNC (Computer Numerically Controlled) router. Some of the elements were just cut out as shapes while others had black and white photographic images printed as a basis for overpainting. All of the shapes are being painted using a combination of spray gun, airbrush and traditional paintbrush techniques.

DID YOU KNOW - Pat Rawlings first job was as a commercial artist for the Greenville Herald Banner in 1974. His first large format art was several 60’ wide backdrops for the Greenville High School Acapella Choir Musicals “The Sound of Music” (1972) and “Fiddler on the Roof” (1973) that were performed at the Greenville Municipal Auditorium.