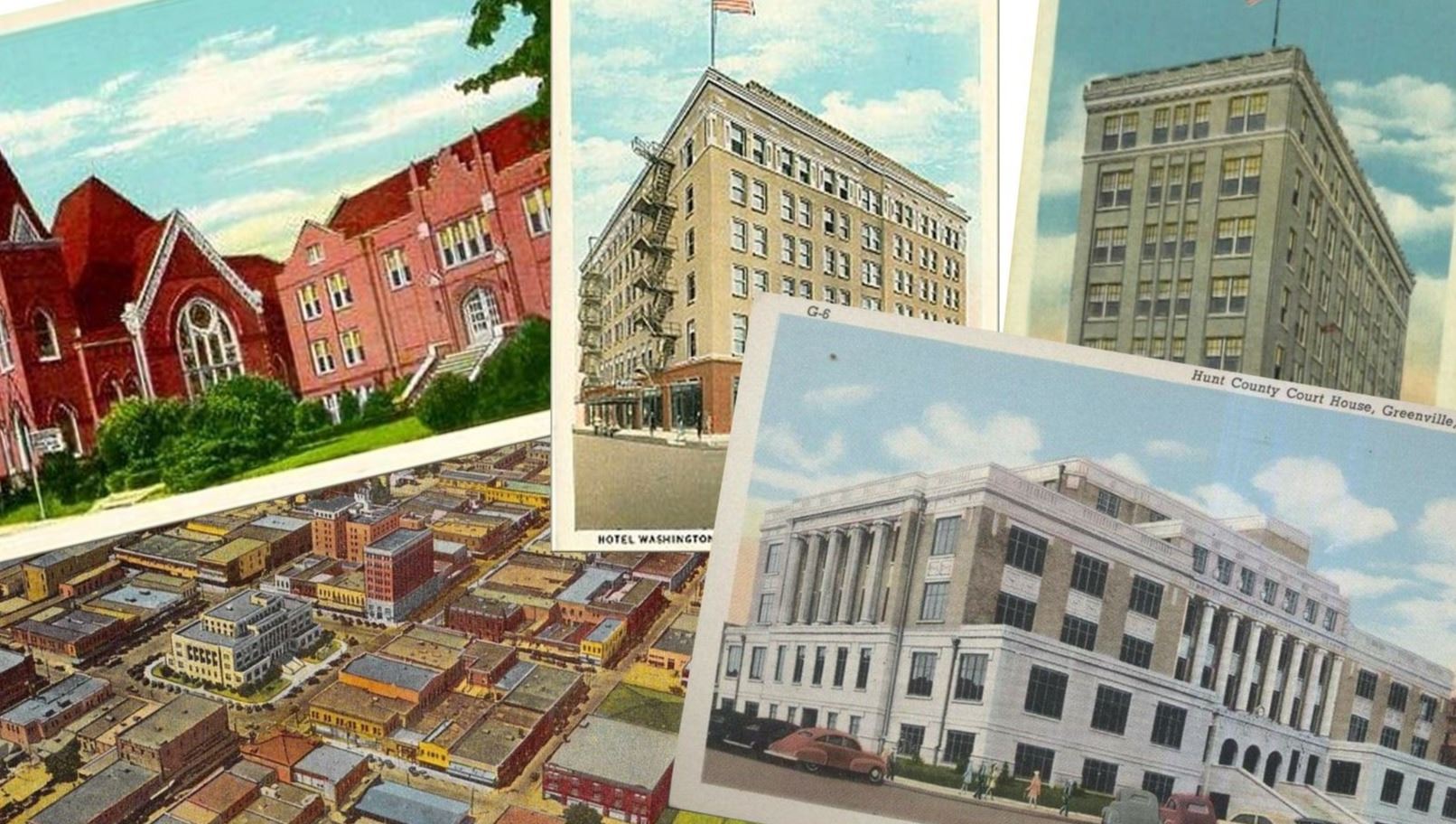 Greenville was carved out of the blackland prairie by pioneers who cleared the area’s tall grass for new homes and farms. When Hunt County was created in 1846 by the first legislature of the new state of Texas in 1846, Greenville was named the county seat.

Almost named Pinkneyville in honor of Texas first Governor James Pinkney Henderson, Greenville was eventually named for Thomas Jefferson Green, a general in the Texas Army for independence from Mexico and, later, a member of the Congress of the Republic of Texas.

The rich black soil that stuck to shoes and buggy wheels when wet proved to be a real economic asset. It grew a high-quality cotton used by English spinning and weaving mills. As a matter of fact, Greenville-produced cotton became a favorite of mills in Liverpool and Manchester England. Cotton brought the railroads to Greenville and with them growth and prosperity. The "cotton capital of the world," Greenville soon boasted the world's largest cotton compress, breaking world records in 1911 and 1912. The population grew to several thousand and the town became a rail hub with 6 railways

As the area began to shift from agriculture to industry in the 1950's, the city developed its first industrial park. Additional industry grew at the converted World War II Majors Field Air Corp Base, now the municipal airport and location of L-3's Greenville facility.

Today, Greenville is a thriving community of over 26,000 that combines the best of hometown warmth with nearby big-city excitement and the natural beauty of East Texas. The community's many civic organizations, churches, and city-wide festivals and celebrations are enhanced by the availability of local parks, museums, library, golf courses, and nearby lakes.

Greenville’s historical attractions are concentrated in the Downtown area and at the Audie Murphy American Cotton Museum. Please see below for some of our most interesting sights.

Extensive exhibits about WWII’s most decorated soldier - Audie Leon Murphy - are just the beginning at this family friendly museum located on I-30 near exit 95.  You will also see exhibits about the days when cotton was king in Greenville, walk down a turn of the century streetscape filled with shops and a vintage car, see a wreath made of human hair, stand next to a life size image of the “Giants” that once roamed our town, and see what a wooden leg and an autographed baseball by June Alyson have in common.  You can also venture outside the main museum building and visit Greenville's oldest home - the Ende Gillard home built in 1857 - 1859.  You can also pay tribute to the areas fallen soldiers at the Hunt County War Memorial.  To plan your museum visit, please see Cotton Museum. 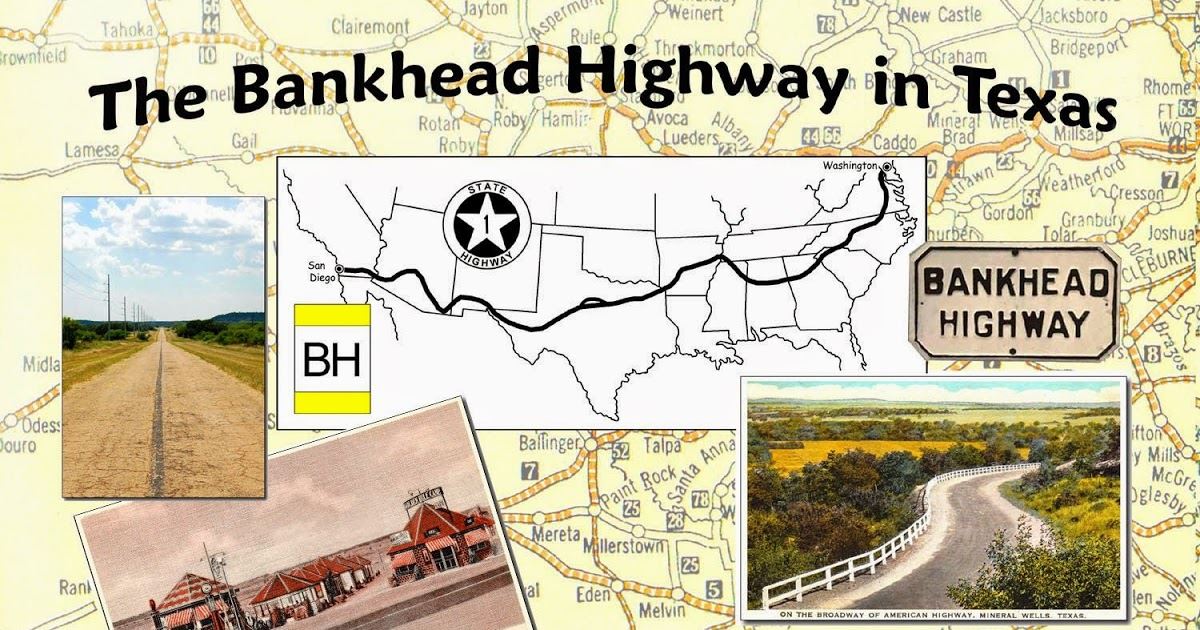 Katy Depot (3102 Lee Street).  This train station was constructed in 1896 and was operated by the Missouri, Kansas and Texas Railway Company.  It was placed on the National Register of Historic Places in 1997.  President Harry Truman stopped at the station in 1948 during his “whistle stop” campaign tour.

Old Post Office (2920 Lee Street).  The Greenville Post Office, constructed by Fell and Ainsworth of Waco, opened on April 14, 1910.  The Renaissance Revival-style building housed IRS offices, army recruiters, and various New Deal administrations.  It is most famous as the site where World War II hero Audie Murphy enlisted in the army.  Today, it is owned and maintained by Greenville Rotary and is used as event space on the main level and features modern office space on the second floor.  Every October, the basement becomes one of the areas most popular haunted attractions - The Haunted Landmark. 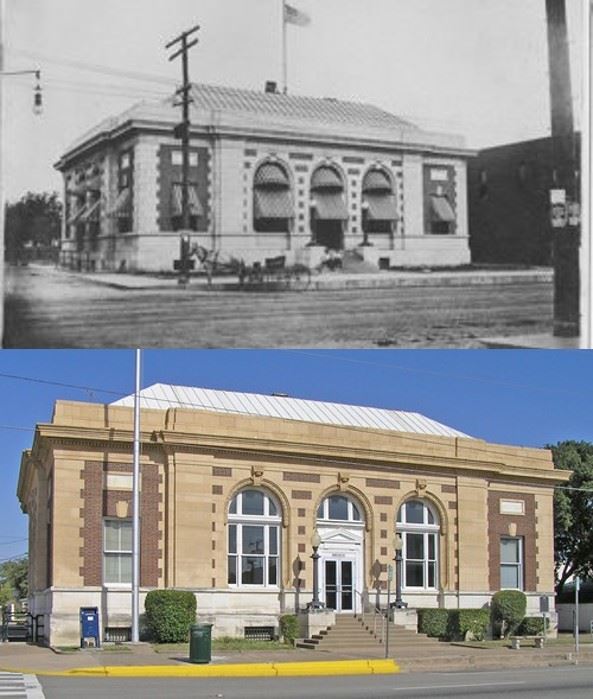 Majors Stadium (Houston at Jordan Streets).  Built in 1929, this facility was originally known as Phillips Field and was a football stadium for local high school football teams.  In the 1940’s the stadium was transformed to accommodate the newly formed minor league baseball team – the Greenville Majors.  The most famous game played in the facility was on April 10, 1949 when the New York Yankees were defeated by the Greenville Majors 4 – 3 in an Exhibition Game.  The stadium was closed in 1964 and the entrance arch is all that remains. 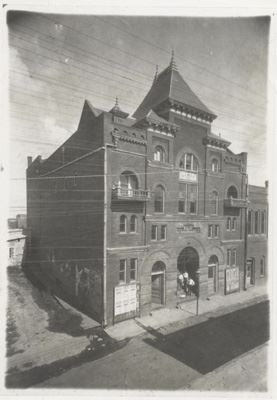 Hunt County Courthouse (2500 Lee Street).  The current courthouse is actually the seventh Courthouse to stand in Hunt County.   In 1846, when Hunt County was created, court sessions were held under oak trees at the corner of St. John and Bourland streets until the first courthouse (a log cabin) was built in 1847.  It was replaced in 1853 by a 2-story frame courthouse on the northwest corner.

The center of the square was used in 1858 for the third courthouse. The first brick structure in the county, it was condemned in 1874.

The fifth courthouse, an ornate red brick building with white stone trim, was constructed in 1883. Thirteen months later it was destroyed by a fire which heavily damaged the town's commercial district. A new courthouse, which closely resembled the 1883 structure, was built in 1885. In 1928 it was torn down to make room for construction of the present courthouse, the seventh for Hunt County. A formal dedication was held on April 11, 1929, the 83rd anniversary of the county's founding. 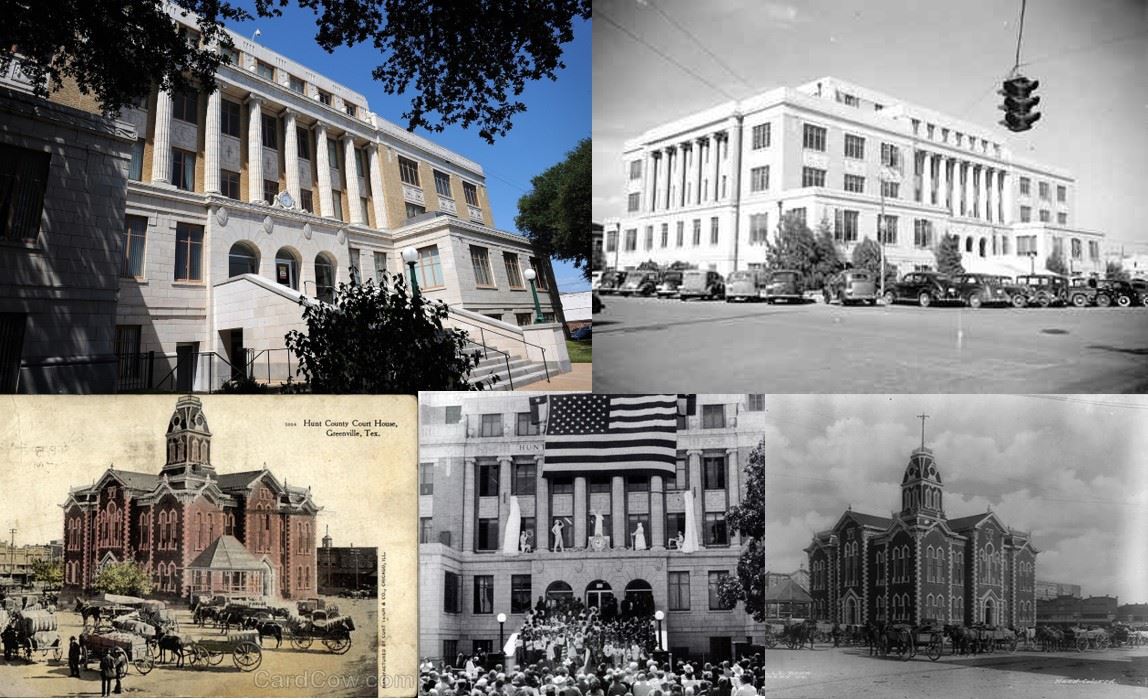 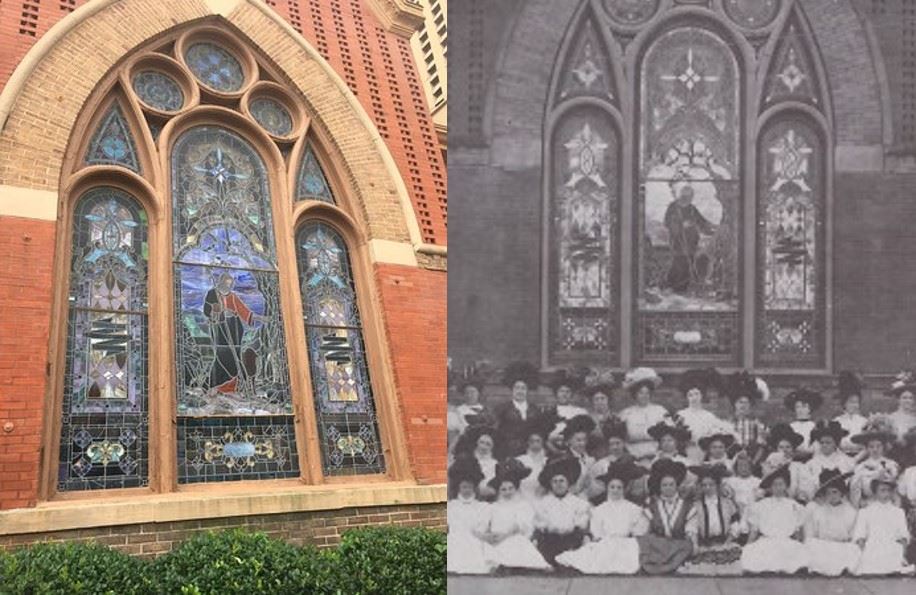 Central Christian Church (2611 Wesley Street) This church was organized in 1879 as First Christian Church.  Led by elder James Pickens, a minister from Alabama, the congregation first met in a Union church on Lee Street.  The Rev. T. W. Caskey served as the first regular pastor of the church, and a small frame sanctuary was built on Wesley Street.  The name of the congregation was changed to Central Christian Church when the present sanctuary was built in 1898-99.  The oldest church structure remaining in Greenville, it was built at a cost of $23,000.00.  An outstanding, robust example of the gothic revival style of architecture, it features intact towers, art glass windows, and exceptional grill-like brick work.

Greenville Municipal Building/Auditorium (2821 Washington Street) At the beginning of the 20th Century, citizens of Greenville were keenly aware of the need for an auditorium, a gathering place for the community.  However, it was not until the late 1930’s that the dream finally became a reality.  The Greenville Municipal Building and Auditorium was completed in 1939 as a public works project of the Roosevelt Administration.  Over the years, the auditorium’s stage has been graced by a variety of artists including Elvis Presley, Duke Ellington, Van Cliburn, and Loretta Lynn.  Throughout it’s 80+year history, the GMA as it is now known remains a cultural cornerstone for Greenville and the North East Texas area. 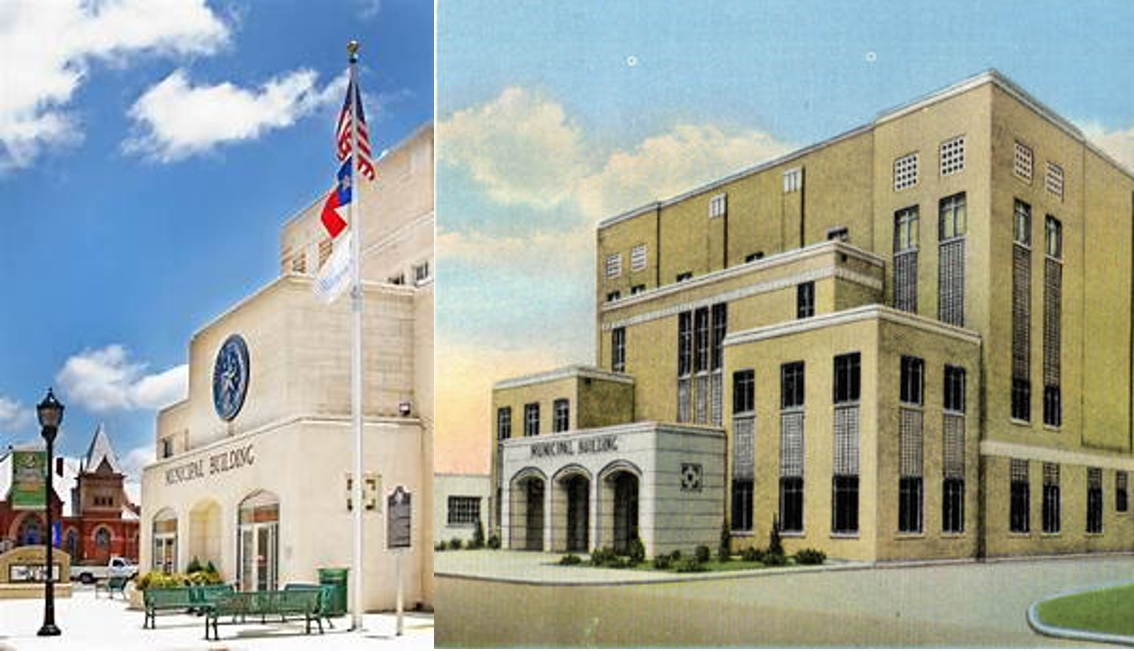 Stroll along the route of Greenville's Historic Downtown Walking Tour for a glimpse into the activities and lifestyles of the people who settled our city and made it prosper. Throughout downtown, you will find Main Street Markers, Texas Historical Markers, and structures that are on the list of the U. S. Department of the Interior's National Register of Historic Places. You'll never know what you might discover as you stroll around Downtown Greenville and learn how the past made us into the city we are today.

Main Street Markers - These special markers feature stories that focus on historic topics (rather than trading the history of particular locations). Learn why locals never tied their horses to lamp posts, how the water company proved the new plumbing worked, and why Elvis came to Greenville. Downtown Greenville has 14 Main Street Markers.

TEXAS HISTORICAL MARKERS - These markers are site specific, that is, they tell the story of a building or place. Find out why the county has had seven courthouses, where the first train steamed into town, when local mail service began, and when the Greenville Majors beat the New York Yankees. As you explore Downtown Greenville, you will find 10 Texas Historical Markers.

NATIONAL REGISTER OF HISTORIC PLACES - Designates significant buildings recognized by the U.S. Department of the Interior's National Register of Historic Places. Greenville has four buildings downtown on this list - The old Katy Depot located at Wright and Lee Streets, The old Greenville Post Office at Oak and Lee Streets, The Hunt County Courthouse bordered by Lee, Stonewall, Washington, and St. John, and Central Christian Church located at Washington and Wesley.