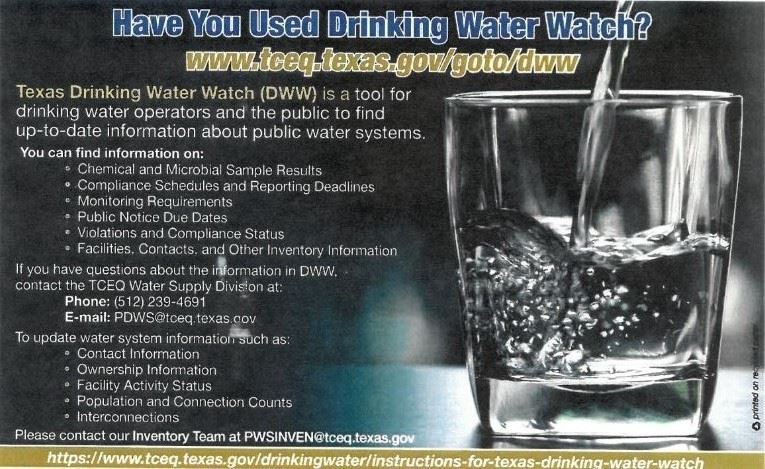 
For information about water treatment or to set up a tour of the plant, contact Robert Burney, Water Plant Superintendent, at (903) 457-3190.


The City of Greenville obtains untreated (raw water) from two sources, both of which are dependent upon the Sabine River for refilling. A series of off-channel reservoirs, located on the north side of Greenville, is the source of raw water that is used most of the year. The secondary source of raw water is Lake Tawakoni, which is used during the dry seasons of the year.


The Water Treatment Plant is manned and operated 24 hours a day. The EPA and TNRCC performed a comprehensive performance evaluation on the plant in 1994. As a result, the plant and operations participated in a Comprehensive Technical Assistance (CTA) Program in 1995 and 1996. This program was designed to optimize all plant processes and has been highly successful.


The facility consistently produces water which meets and exceeds both state and federal standards. All personnel responsible for producing this treated water are in a constant state of training in an effort to ensure this quality remains the best. On an average day, operators will perform over 140 different tests on both the raw and treated water.


A combination of chlorine and ammonia are added as a disinfectant (average dose 3.0 parts per million) in accordance with state and federal regulations. All chemicals added during treatment and distribution are certified (NSF 60) safe for potable (finished drinking) water use.


Greenville residents have the advantage of an abundant supply of water. The City of Greenville Water Treatment Plant also furnishes water to the City of Caddo Mills, Jacobia Water Supply Corporation, and the Shady Grove Special Utility District .


Due to the drought that occurred in 1996, the City of Greenville found it necessary to dredge around the raw water intake at Lake Tawakoni. Approximately 8,000 cubic yards of silt were removed.


In 1997 and 1998, a SCADA (Supervisory Control and Data Acquisition) System was installed that connected the Water Plant and Wastewater Plant. The purpose of the SCADA is to improve data collection and provide cost savings.